Ivermectin for COVID And Cancer Treatments

Ivermectin is included within NIH possible treatments for COVID19

Listed just below Remdesivir (Which YOU should NEVER take!), and on NIH Ivermectin is not recommended – But IS Listed!

Here is the pdf

Watch the congressional testimony of MIRACULOUS Effects of Ivermectin - lower center of this page.

We show that treatment with the FDA-approved anti-parasitic drug ivermectin induces immunogenic cancer cell death (ICD) and robust T cell infiltration into breast tumors. As an allosteric modulator of the ATP/P2X4/P2X7 axis which operates in both cancer and immune cells, ivermectin also selectively targets immunosuppressive populations including myeloid cells and Tregs, resulting in enhanced Teff/Tregs ratio. While neither agent alone showed

Oesophageal squamous cell carcinoma (ESCC), the most common form of oesophageal malignancies in the Asia‐Pacific region, remains a major clinical challenge. In this study, we found that ivermectin, an effective antiparasitic drug that has been approved for patients to orally treat onchocerciasis for over 30 years, displayed potent antitumour activity against ESCC cells in vitro and in nude mice. We demonstrated that ivermectin significantly inhibited cell viability and colony formation, and induced apoptosis through a mitochondrial‐dependent manner in ESCC cells. Ivermectin also abrogated ESCC cell migration, invasion, as well as the protein levels of MMP‐2 and MMP‐9. Mechanistically, ivermectin strongly inhibited the expression of PAK1; by further gain‐ and loss‐of‐function experiments, we confirmed that PAK1 played a crucial role in ivermectin‐mediated inhibitory effects on ESCC cells. In addition, the data indicated that ivermectin promoted PAK1 degradation through the proteasome‐dependent pathway. Additionally, ivermectin synergized with chemotherapeutic drugs including cisplatin and 5‐fluorouracil to induce apoptosis of ESCC cells. Interestingly, the in vivo experiments also confirmed that ivermectin effectively suppressed tumour growth and lung metastasis of ESCC. Collectively, these results indicate that ivermectin exerts a potent antitumour activity against ESCC and is a promising therapeutic candidate drug for ESCC patients, even those carrying metastasis.

Oesophageal cancer, the eighth most frequent cancer, is the sixth leading cause of cancer‐related mortalities in the world, with more than 455 thousand people newly diagnosed oesophageal cancer cases and over 400 thousand deaths occurred per year.1 The majority of oesophageal cancers can be split into oesophageal adenocarcinoma (EAC) and oesophageal squamous cell carcinoma (ESCC) according to the histological subtypes.2 Worldwide, there are an estimated 398 000 new cases of ESCC (representing 87% of all oesophageal cancer) occurred in 2012.3 About 80% of the total global ESCC cases occur in the South‐East and Central Asian region, especially in China where contribute 53% of the global cases.1 Although the use of diverse strategies including surgical resection, in combination with chemotherapy (cisplatin and 5‐fluorouracil), radiotherapy and other modern techniques, the prognosis for ESCC patients is still poor, with a less 20% five‐year overall survival rate,4 mainly due to lacking clinical approaches for early diagnosis, high incidences of tumour metastasis and recurrence, as well as the resistance of the cancer cells to radiotherapy and chemotherapy.5–7 Thus, there is an urgent need to find or develop novel potential therapeutic agents.

Avermectin (AVM), a 16‐membered macrocyclic lactone compound, was initially discovered and purified from Streptomyces avermectinius by Ōmura and Campbell in 1967.8, 9 Avermectin exhibited remarkably profound antiparasitic bioactivity and earned the 2015 Nobel Prize for Physiology or Medicine. Ivermectin is a dihydro derivate of avermectin that displayed much more efficient against several kinds of parasitic diseases including to onchocerciasis (also known as river blindness) and lymphatic filariasis.10, 11 Mechanistically, this compound can highly and selectively bind to glutamate‐gated ion channels (Glu‐Cl) or increase the activity of neurotransmitter‐gated gamma‐aminobutyric acid (GABA) only in a broadspectrum of parasites but not mammals.12, 13 Ivermectin is a well‐tolerated agent that has been approved for application in humans to treat onchocerciasis, strongyloidiasis, parasite infections and other worm infestations including ascariasis, enterobiasis and trichuriasis.14, 15 In 2010, Sharmeen et al first reported that ivermectin exhibits strong pre‐clinical activity against leukaemia cells and primary patient samples, and diminishes tumour growth in three different mouse models of leukaemia.15 Consistently, a recent report showed that ivermectin induces chronic myeloid leukaemia (CML) cell apoptosis, but not normal hematopoietic cells, through inducing oxidative stress and disrupting mitochondrial functions.16 Besides haematologic malignancies, mounting evidence has demonstrated that ivermectin is a promising antineoplastic agent for a wide range of malignant solid tumours including breast cancer, epithelial ovarian cancer, melanoma, colon cancer and glioma.14, 17–20 Up to date, whether ivermectin is active against ESCC remains underexplored.

In the current study, our goal was to explore the antitumour activity and its molecular mechanism of ivermectin against ESCC. The results showed that ivermectin effectively suppressed ESCC cell growth in vitro and in vivo, and induced apoptosis. Moreover, ivermectin diminished the abilities of migration and invasion, and the metastasis in nude mice. Mechanistically, we found that PAK1 played a crucial role in ivermectin‐mediated inhibitory effects on ESCC cell growth, migration and invasion. Furthermore, ivermectin enhanced the sensitivity of ESCC cells to cisplatin (CDDP) or 5‐fluorouracil (5‐FU). Altogether, our studies provided the first pre‐clinical evidence demonstrating that ivermectin is a promising therapeutic candidate drug for ESCC patients. 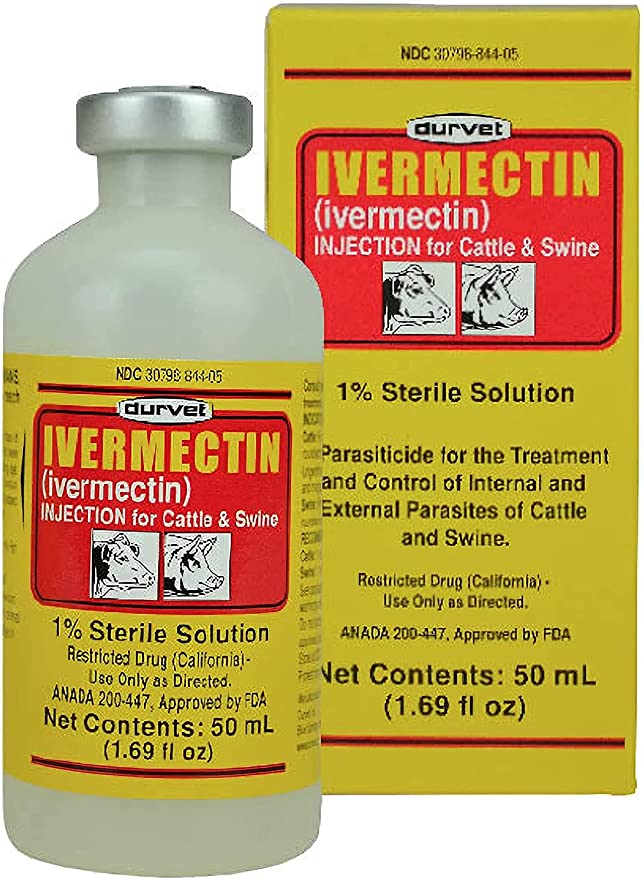 PRO-TIP: Recommended transfer Ivermectin to glass dropper bottle and apply 1 to 2 drops daily on bottom of feat OR on belly button. (Says “Not for humans” but is working great for people)