We Should NOT Be Wearing Masks — Leads to Cancers

Experimental Assessment of Carbon Dioxide Content in Inhaled Air With or Without Face Masks in Healthy Children.

The normal content of carbon dioxide in the open is about 0.04% by volume (ie, 400 ppm). A level of 0.2% by volume or 2000 ppm is the limit for closed rooms according to the German Federal Environmental Office, and everything beyond this level is unacceptable.4

The mean (SD) age of the children was 10.7 (2.6) years (range, 6-17 years), and there were 20 girls and 25 boys. Measurement results are presented in the Table. We checked potential associations with outcome. Only age was associated with carbon dioxide content in inhaled air (y = 1.9867 – 0.0555 × x; r = –0.39; P = .008; Figure). Hence, we added age as a continuous covariate to the model. This revealed an association (partial η2 = 0.43; P < .001). Contrasts showed that this was attributable to the difference between the baseline value and the values of both masks jointly. Contrasts between the 2 types of masks were not significant. We measured means (SDs) between 13 120 (384) and 13 910 (374) ppm of carbon dioxide in inhaled air under surgical and filtering facepiece 2 (FFP2) masks, which is higher than what is already deemed unacceptable by the German Federal Environmental Office by a factor of 6. This was a value reached after 3 minutes of measurement. Children under normal conditions in schools wear such masks for a mean of 270 (interquartile range, 120-390) minutes.3 The Figure shows that the value of the child with the lowest carbon dioxide level was 3-fold greater than the limit of 0.2 % by volume.4 The youngest children had the highest values, with one 7-year-old child’s carbon dioxide level measured at 25 000 ppm.

The limitations of the study were its short-term nature in a laboratory-like setting and the fact that children were not occupied during measurements and might have been apprehensive. Most of the complaints reported by children3 can be understood as consequences of elevated carbon dioxide levels in inhaled air. This is because of the dead-space volume of the masks, which collects exhaled carbon dioxide quickly after a short time. This carbon dioxide mixes with fresh air and elevates the carbon dioxide content of inhaled air under the mask, and this was more pronounced in this study for younger children.

This leads in turn to impairments attributable to hypercapnia. A recent review6 concluded that there was ample evidence for adverse effects of wearing such masks. We suggest that decision-makers weigh the hard evidence produced by these experimental measurements accordingly, which suggest that children should not be forced to wear face masks.

Additional MASK Information as Provided Below

First of all, masks don’t stop viruses. Any virus. It even says so on the box of blue masks you pick up at Target.

I am President of a Manufacturing Company in Saskatchewan, Canada. Under Saskatchewan Occupational Health & Safety Rules it is illegal for me to expose any of my Employees to a Hazardous Environment, above 1,500 ppm CO2 levels (Atmospheric is 375 to 400 ppm), or below 19.5% Oxygen levels (Atmospheric Oxygen is 20.9%). OSHA Safety Officers have measured Oxygen levels at 17.4% behind an N95 mask with an IBRID 6 Gas Monitor. Del Bigtree, Medical Research Journalist measured CO2 levels between 8,000 to 10,000 ppm behind a cloth mask and over 10,000 ppm behind an N95 mask which is Hazardous Environment!

If masks do, indeed, restrict oxygen and increase CO2, there may be other unintended consequences. Miscarriages and stillbirths rose over 300% during a six-week period in early 2021. Obstetricians also report smaller umbilical cords, which indicates that the pre-born baby isn’t getting all the oxygen (via the placenta) that he/she should have.

Both emotional and physical health is being harmed by the use of masks. Clearly, these are not in the interest of life.

Read the entire article at LifeSiteNews.com

Rense.com published this study of mask wearing Hypoxia, and Hypercapnia

Wearing a mask causes physiological changes to multiple organ systems, including the brain, the heart, the lungs, the kidneys and the immune system. We examine changes in oxygen and carbon dioxide concentrations in masked airspace that is available to the airways over the first 45 seconds of wear. Our findings of reduced oxygen and increased carbon dioxide in a masked airspace are not inconsistent with previously reported data. We also consider the range of injuries known to occur to the above-named organ systems in a state of hypoxia and hypercapnia. As an excretory pathway, carbon dioxide release by cells throughout the body, and then past the alveoli and then the airways and orifices, has not been previously challenged by deliberate obstruction in the history of the animal kingdom, except for relatively rare human experiments. Self-deprivation of oxygen is also unknown in the animal kingdom, and rarely attempted by humans. We examine the physiological consequences of this experiment.

MASKS and HYPERCAPNIA Do masks cause systemic hypercapnia? Airway obstruction is a long recognized cause of retention of carbon dioxide and respiratory acidosis. A sustained level of increased carbon dioxide stays inside of masked air, compared to room air, which in turn sustains a low level of hypercapnia. Rebreathing of exhaled air has been found to quickly elevate [CO2] in available air above 5000 ppm, and to increase arterial CO2 concentration and to increase acidosis.1 The mechanism of mask-induced hypercapnia may also include the moisture on a mask trapping carbon dioxide from exhalation. Some carbon dioxide diffuses in the air, more so if dry, but some portion of it, trapped by water vapor and mask moisture, would form a weak, unstable acid with water, for re-circulation to the airways and lungs. The mechanism is that retention of CO2 causes an increase in PCO2. This is the primary disturbance in respiratory acidosis. It results in an increased concentration of both HCO3- and H+, which is measured as a lower pH.

Hypercapnia is widely recognized to be an independent risk factor for death. 2 3 4 5 A number of organ systems are negatively impacted, including the brain, heart, lungs, immune system and musculoskeletal system. 6 7 2

How quickly do masks increase carbon dioxide in the masked airspace?

We used a new calibrated carbon dioxide meter to measure ambient carbon dioxide in room air, and then inside the masked airspace of three different masks after donning each in turn. This experiment involved a disposable surgical mask, a N-95 mask and a cloth mask.

We recorded carbon dioxide parts per million inside the masked airspace. The meter refreshed its readings at 5-second intervals, and we used those same intervals in recording CO2 parts per million. The maximum CO2 reading on the meter is 10,000 parts per million. The table of those values are shown in Table 1, with the mean values shown for each 5-second interval in the first 45 seconds. After 45 seconds, the readings passed the maximum meter reading of 10,000 ppm [CO2], and were thereafter indeterminate from the meter. 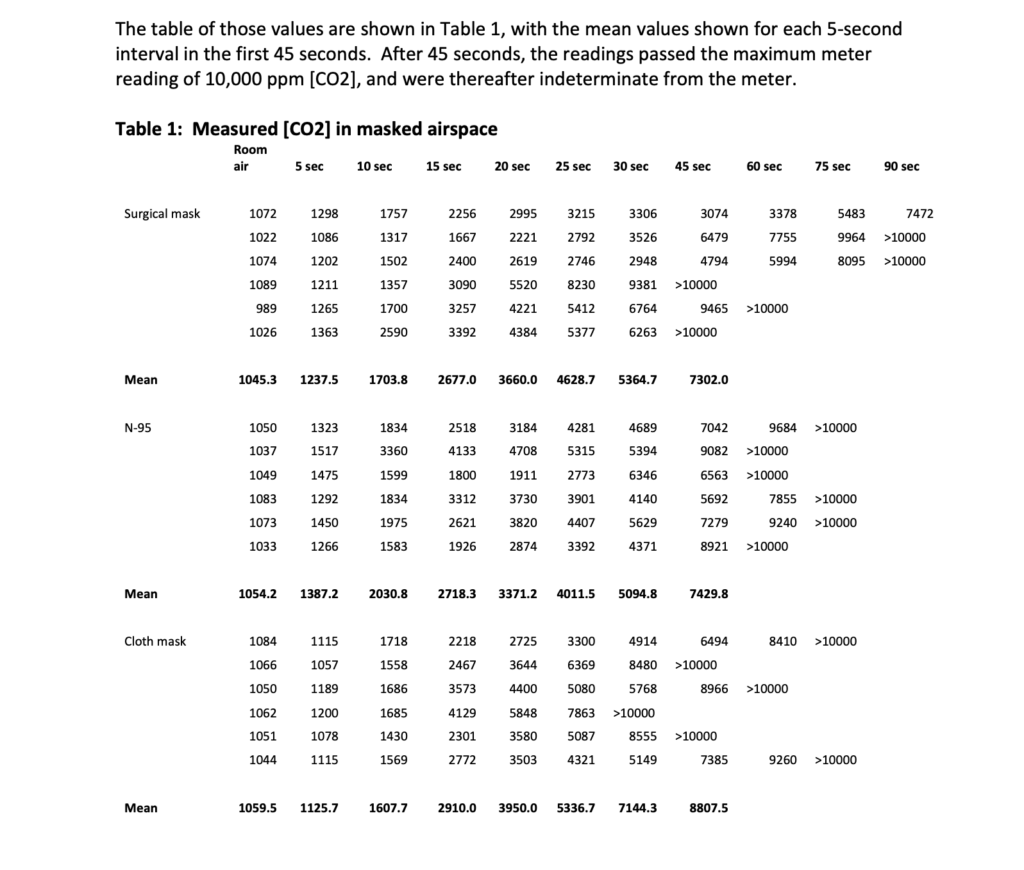 If we look at the time in which our readings did not yet exceed the maximum of the meter, then we have the following graph, Graph 1, of the average rise in carbon dioxide concentration inside the masked air for each mask, as [CO2] rose over the first 45 seconds of wear. 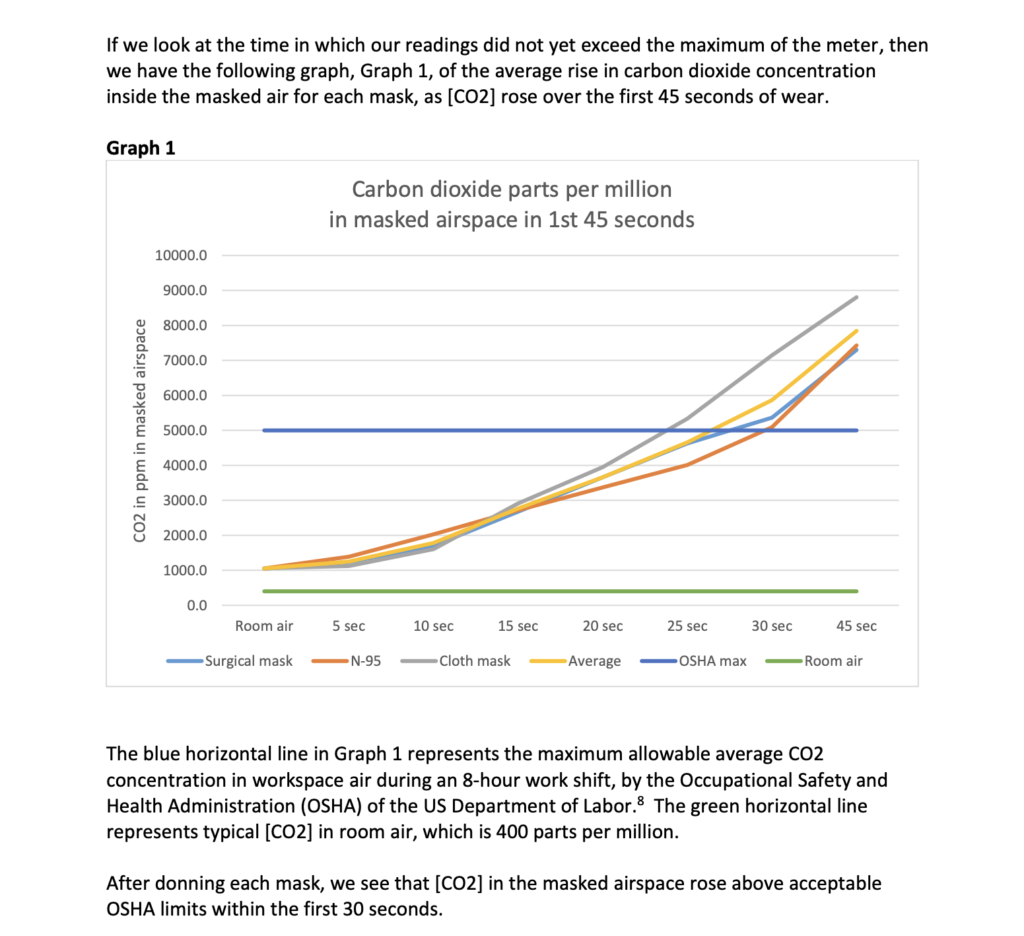